On July 4th, just hours before fireworks would light up skies nationwide, a Virgin Atlantic flight from New York’s JFK airport to Heathrow in London was forced to make an emergency landing in Boston after an external battery pack caused a fire in the plane’s cabin.

Luckily, all 217 passengers on the A330 Airbus plane were safely evacuated after landing, though the alarming incident served as a reminder that there have been hundreds of air/airport incidents involving lithium batteries; from the e-cigarette and spare battery on a recent DL flight 880 that resulted in an emergency call to the fire department, to the overheated laptop on PSA flight 5062 that had to be thrown out of the aircraft by a flight attendant, to the smoking cellphone on a recent flight from Chicago to London that was inadvertently lodged between two seats.

Susceptible to a condition known as “thermal runaway,” these types of batteries — lithium batteries (disposable) and lithium-ion batteries (rechargeable) — are capable of ignition and subsequent explosion due to overheating. Additionally, the toxic smoke that can be released during those explosions can result in chemical asphyxiation.

And with an average of 600-700 personal lithium devices on board any given plane, the dangers involved have never been more real.

Unlike “burn bags” — which the FAA has specifically warned travelers against using — PlaneGard is explicitly designed to protect from Lithium-ion battery fires that can occur in devices like laptops, tablets, readers, and smartphones.

It both completely contains 100% of the poisonous vapors and smoke that can be released during thermal runaway, and allows one to capture the burning device without actual physical contact with it.

No other technology offers this capability. 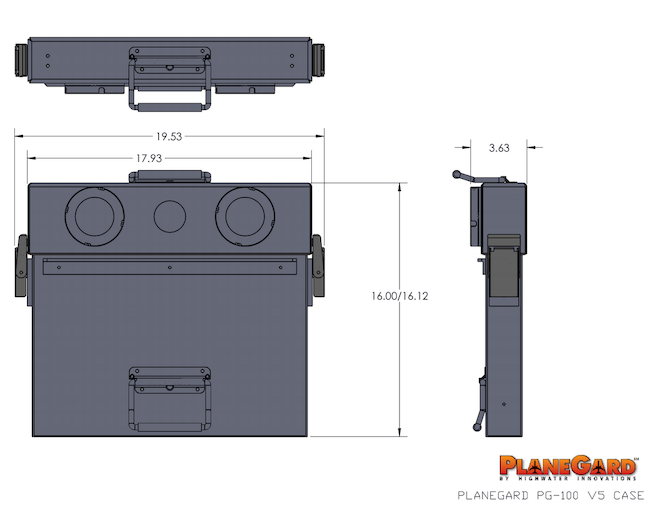 With PlaneGard, you can elect to continue your flight without the need to divert or land on an emergency basis. It can even be refurbished after a burn event, at no charge.

And it’s easy to see why.

Our Commitment to Aviation Safety

Aircraft Services Group charts a course for the Future